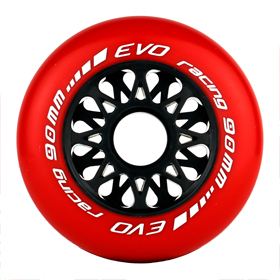 The Bont Jet is the world’s most popular inline speed skate and for good reason; it’s extremely good value for money. Perfect for all levels of speed skating, the racing boot is supportive, comfortable and made by hand using Bont’s unique one-piece manufacturing technique.
The Jet skate starts out being built around a last that has been modified and improved for over 45 years by Mr. Inze Bont. Carbon fiber and fiberglass is hand laid around the memory foam ensuring a very lightweight and strong base. Our epoxy resin is the most heat moldable in the industry and the boot has anti stretch tapes that ensure the boot does not stretch over time. Take your speed skating to the next level with the Bont Jet inline racing skate.

The Jet follows a long linage of Bont inline speed skates. This skate evolved from the Bont Sharkie and has sold over 1.4 million pairs since it was first launched in 1980. The boot has had a lot of upgrades since then as it has had to adapt to higher speeds and larger wheels. The Jet inline speed skate is now around 40% stronger than when it was first made thanks in part to the use of carbon fiber. Even though the manufacturing process of making a one-piece-boot is longer and more expensive than that of a two piece boot, we still make it the same way it has been made since 1980.